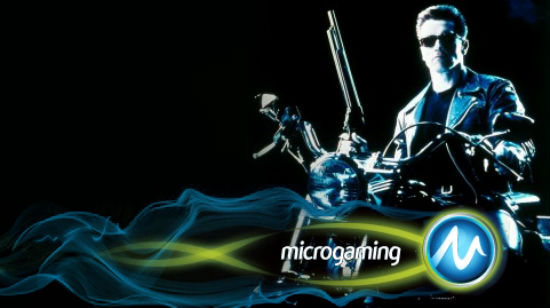 Few films have caught the attention of the public than James Cameron’s seminal 1991 Sci-Fi blockbuster Terminator 2. The epic battle between the liquid-metal T-1000 and Arnold’s T-800, the new protector for John Connor, was the most expensive film ever to be made at the time yet cinematically it was a triumph.

And now, over 20 years later as promised, he’s back in a brand new slot this June, Terminator 2.

As you would expect from a film that made its name on the quality of its visuals and presentation, the Terminator 2 Online Slot is stunning in every respect. The graphics are breathtaking, the sound effects sublime and the video cuts direct from the film give the slot great pace and huge appeal to the millions of fans of the Terminator series.

There are 5×3 reels and in the base game you can win on any of 243 paylines, however when you land a Scatter symbol and hit the Free Spins game, this expands to an incredible 1024 ways to win, giving you even more chance of success.

A eye-catching features is T-800 vision, which when activated, turns the screen to represent the T-800’s famous red-hue digital vision, where the player can target symbols to earn fantastic prizes.

All the key characters from the film, T-800, T-1000, Sarah Connor and John Connor are present and each have their own extensive animation taken direct from the film to help bring the game to life.

Land the dreaded T-1000 during Free Spins and rather than bring destruction and mayhem, it will morph into a winning symbol, giving you even more chance to land winning combinations.

The brand new online slot Terminator 2 hits casino’s this June and is sure to be one of the most eagerly anticipated new slots of the year, so don’t miss out!