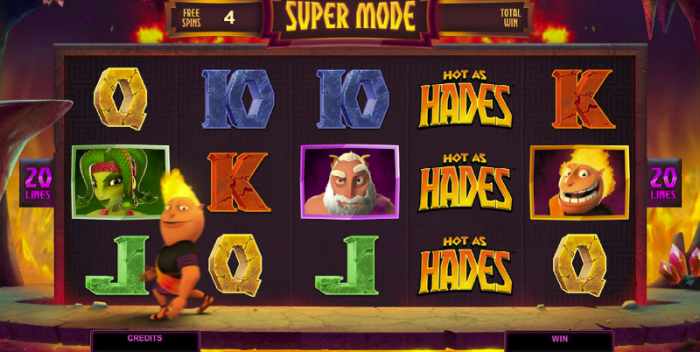 It is time to dive into Microgaming’s new game, which is very loosely based on Greek mythology, featuring Medusa, Poseidon, Zeus and even three-headed dog of the underworld, Cerberus. Exciting features such as the Super Mode, Held Wilds and the Crystal Helm bonus feature are awaiting in this 5×3 reel slot that offers 20 paylines.

Accompany mischievous Hades himself when battling the gods for cash in this visually stunning game and have lots of fun with a number of varied features. Thus the Super Mode can randomly be triggered in the base game, which will award players 5 free spins. But within the mode itself a symbol position can be turned into a Held Wild for the remainder of the free spins, which allows for even better winning options.

The appearance of three to five scatter symbols will trigger the bonus game. Follow Hades and trusted sidekick Cerberus into the Crystal Helm feature, consisting of five levels that you will go through consecutively (unless the Pop section is selected).

Level 1 presents the Pillar of Awesomeness, where via a single pick one win all and four win values are offered as prizes. Since there are no Pop options, you will definitely go through to level 2 next.

Level 2 will see you inside Medusa’s Maze. Here they will find one win all, three win values and one pop item. You will have to try your luck and pick the win all and one of the win value options in order to progress to the next level.

It gets harder in Level 3, Poseidon’s Ocean, where you will face your first god, who also happens to be brother of Hades. Whilst there is still one win all and two win values to pick from, there are also two pop items, which will end the feature if picked. Again, the win all and one win value pick will allow you to progress.

If you picked right, you’ll now be on Zeus’ Stairway in level 4. Though facing the mightiest of the gods, this level actually works exactly like the one before, which is almost a relief.

Depending on your luck level 5 will see you in the Chamber of the Chrystal Skull. Here you have a maximum of two choices between five chests. If you choose to pick a second option, you will have to keep it no matter what the first pick had been.

Looking at a promo video for the Hot as Hades slot, the graphics are stunning. The high quality we’re used to from Microgaming is definitely out in full force. The characters are well designed and Hades with his flaming hair, who is the host of the game, seems to be quite the goofball.

Get ready to go with Hades and his pup Cerberus on the quest for the Crystal Helmet in this exciting looking new game.