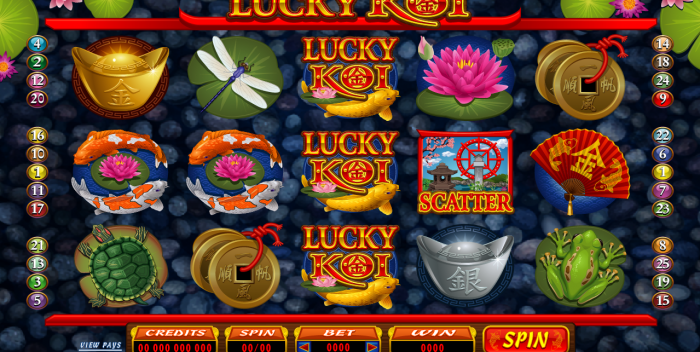 Can you net the big prize on the new Lucky Koi video slot this January?

Microgaming have announced one of their latest new releases and while the name may imply the opposite, there is nothing fishy about the fantastic new American hybrid video slot Lucky Koi that is hitting Microgaming casinos from January!

Of course, our fin-laden aquatic friends are the stars of the show as the name of the slot suggests, but they are just a part of the overriding theme of an eastern water garden.

The symbols on the reels bring this vividly to life with a number of eastern and water garden themed icons uses including paper fans, stone lanterns, water lilies, frogs, dragonflies and of course a variety of colourful Koi Carp.

Add to the mix a fabulous yet gentle eastern soundtrack and a wealth of in game sound effects and you are instantly transported to this beautiful and mystical part of the globe.

The slot offers 25-paylines over 5-reels of action and there’s plenty of features in the game to keep players on their toes.

Land the Lucky Koi on any line and it acts as a Wild symbol, allowing it to be used as one of many other symbols in the game, giving you many more chances to hit a winning line.

For the real action to start though, land the stone lantern scatter on 3 or more reels and you trigger the Bonus Game section.

Here you can select from a random Free Spin game, where you are awarded between 10 and 30 free spins, plus a multiplier of up to 5x on any winnings in the section.

Or you can play the Koi Bonus Game, where you pick between 3 and 6 Koi Carp to win either a prize or another free pick in the game!

With prices starting at just 0.01 per line and a jackpot of 125,000 coins available, will you land the big money Lucky Koi this January?